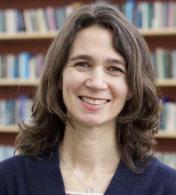 Anna Aizer received her degree in Economics from UCLA in 2003 and came to Brown in 2004 after a postdoctoral fellowship at Princeton University's Center for Research on Child Wellbeing. She is a labor and health economist with interests in the area of child health and well-being. She is also co-director of the NBER's program on Children.

Her current work considers the mechanisms behind the intergenerational transmission of poverty.  In particular, she focuses on the roles played by health insurance and access to medical care,  domestic violence, exposure to environmental toxins, the role of stress, and poor children's greater interaction with the juvenile justice system in explaining why the children of poor mothers are more likely to grow up to be poor themselves.

Anna Aizer, assistant professor of economics and public policy, received her Ph.D. in economics from the University of California, Los Angeles in 2002. She works in the areas of labor and health economics. She has examined the impact of public programs on child health and well-being and the economic determinants and consequences of domestic violence. The focus of her current work is the intergenererational transmission of health and income.

“The Long Term Impact of Income Transfers During Childhood”

Recent literature documents that adverse early-life conditions can have negative long-term effects on education, labor market outcomes, and mortality. However, there is scant evidence as to whether public policies such as income transfers to poor families can effectively improve the underlying conditions of the young.  We propose the first analysis of the long-term effects of cash transfers (welfare) on recipient children by evaluating the effects of Mothers’ Pension (MP) programs on mortality, disability, earnings and educational attainment. The results will better inform policy-makers regarding the potential for income transfers to reduce the impact of disparities in childhood circumstances on lifetime differences in socioeconomic status and health.

Violence against women often initiates or escalates during pregnancy.  In this study, I estimate the causal impact of violence against women during pregnancy on birth outcomes.  Using data from the state of CA that includes hospial records linked with birth outcomes, I identify women who were admitted to the hospital for an assault while pregnant.  To address the endogeneity of assault, I use IV methods and arguably exogenous variation in domestic violence that results from changes in local prosecutorial policies related to domestic violence.  I find that assault during pregnancy has a negative impact on newborn health, reducing birthweight by on average mroe than 160 grams.  These results suggest that domestic violence can explain some of intergenerational transmission of poverty.

"The Economic Determinants of Domestic Violence"
Everyday roughly 14,000 women in the United States are battered and four are killed by their intimate partners, prompting former Surgeon General C. Everett Koop to label domestic violence "the single most important health issue in the U.S." Despite the prevalence and high costs of domestic violence, much remains to be understood about the economic determinants of battering. This project analyzes the impact of women's relative wages on the prevalence of battering. Existing theory is ambiguous with respect to the impact of relative income on violence. An economic model of bargaining predicts that as a woman's resources increase relative to those of her husband, violence against her should decline. Other theories, exchange theory among them, predict the opposite. It is left to empirical work to determine the nature of the relationship.

"Human Capital, Social Capital and Infant Health: Evidence from New Panel Data"
This project answered three outstanding questions about the relationships between human capital, social capital, and the determinants of infant health. First, how does maternal education affect infant health in a rich country such as the United States? Second, can "network effects" explain geographical/ethnic correlations in the use of publicly funded maternity care services; and third, how the implementation of Medicaid managed care in California has affected access to maternity care services.
Role: Investigator

(Aizer, Anna Ph.D.) 4/1/2003-9/30/2002
California Policy Research Center  $14,000
"The Impact of Outreach on Medical and Healthy Families Enrollment and Child Health: Lessons from California"
Of the 1.8 million uninsured children living in California, 800,000 were eligible for but not enrolled in Medicaid, the public health insurance program for poor children. This study estimated the impact of the outreach campaign California launched in mid-1988 on enrollment in Medicaid, with a particular focus on the location of community-based application assistants and the timing and placement of television advertisements. Our estimates suggest that these efforts to reduce informational and administrative barriers or costs are effective means of increasing Medicaid enrollment. Moreover, the two efforts appear to be complementary.
Role: Investigator

Aizer, Anna and Janet Currie "Networks or Neighborhoods? Interpreting Correlations in the Use of Publicly-Funded Maternity Care in California," Journal of Public Economics 88 (2004) 2573-2585.

Aizer, Anna "Low Take-up in Medicaid: Does Outreach Matter and For Whom?" American Economic Review Papers and Proceedings, May 2003.

Ozminkowski, Ronald, Aizer, Anna and Gerri Smith "The Value and Use of the Qualified Medicare Beneficiary Program: Early Evidence from Tennessee." Journal of Health and Social Work, 22(1), Feb 1997.