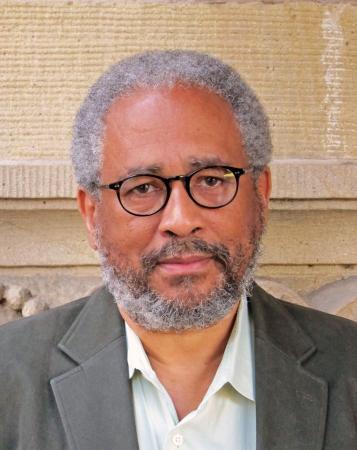 Anthony Bogues (Ph.D., 1994, Political Theory, University of the West Indies, Mona)  is a  writer , scholar, curator, and the Director of the Center for the Study of Slavery and Justice; Professor of Africana Studies, Royce Professor of Teaching Excellence (2004-2007); and currently the   Asa Messer Professsor of Humanities and Critical Theory. He is also an affiliated faculty member of the departments of Political Science,  Modern Culture and Media .   History of Art  and Architecture and  the Center for Latin American and Caribbean Studies.Bogues's major research and writing interests are intellectual, literary and cultural history, radical political thought, political theory, critical theory, Caribbean and African politics as well as Haitian, Caribbean, and African Art. He is the author of Caliban's Freedom: The Early Political Thought of C.L.R. James (1997); Black Heretics and Black Prophets: Radical Political Intellectuals (2003); and Empire of Liberty: Power, Freedom and Desire (2010).  He is the editor of From Revolution in the Tropics to Imagined Landscapes: the Art of Edouard Duval-Carrié. ( 2014 ) ; Metamorphosis : The Art of Edoaurd Duval -Carrie (2017) as well as two volumes on Caribbean intellectual and literary history: After Man, Towards the Human: Critical Essays on Sylvia Wynter (2005) and The George Lamming Reader: The Aesthetics of Decolonisation (2011) He is  the co-editor of a special issue of the Italian journal Filosofia Politica ( 2017 )  on Black  political  thought and  the co-convener of  the interntional  project , " Towards a Global History of Poltiical Thought . "   Additionally he has curated  and co-curated shows in the United States ,  South Africa  and  the Caribbean  and  published numerous essays and articles on the history of criticism, critical theory, political thought, political philosophy, intellectual and cultural history as well as Haitian Art. Bogues is a member of the editorial collective for the journal boundary 2 and was an honorary professor at the Center for African Studies at  the University of Cape Town, South Africa.( 2006-2017 ), and now a Visiting Professor and Curator at the Univeristy of Johanesburg.  He is  a member of the scientific committe of  Le Centre d'Art in Haiti .   He teaches courses on Africana political philosophy, cultural politics, intellectual history and contemporary critical theory and comparative literature of Africa and the African Diaspora as well as courses on the history of Haitian society and art.

My main research interests are interdisciplinary as I focus on questions rather than any specific disciplinary field of study. My current projects are: 1. A book which seeks to think about the questions of human freedom historically and in our present . The book is called "And What about the Human? Wither Human Emancipation and Human Freedom."2. An edited Reader on Black Political Thought. 3 A  series of biographies on three seminal Caribbean figures , Syliva Wynter , CLR James and Andre Pierre ( the Haitian painter )

I am grappling with the following questions : The relationship between freedom and emancipation; the ways in which the questions of freedom are posed within the frame of the radical imagination ; and the writing of a history of freedom as a practice. I am also grappling with thinking about the ways in which historical writings are produced in contexts of racial and colonial power and what philosophies of history are produced. I have an abiding interest in how human beings become subjects and from an historical perspective how human beings were made into " natives " in the colonial world and how historic forms of power leaves traces in the contemporary world. I am also writing two intellectual biographies and working on a series of art projects on the history of Haitian art.

The George Lamming Reader : The Aesthetics of Decolonization

After Man Towards The Human : Critical Essays on Sylvia Wynter

From Revolution in the Tropics to Imagined Landscapes: the Art of Edouard Duval-Carrié

Rhode Island Council for the Humanities for a project on African-American social theatre, (2005)