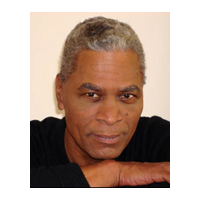 ELMO TERRY-MORGAN is Associate Professor in Africana Studies and the Department of Theatre, Speech, and Dance; and Artistic Director of Rites and Reason Theatre.   Professor Terry-Morgan's areas of specialization are Afrian-American  Theatre, African-American Folk Traditions and Cultural Expressions, and Playwriting.  Noted for his interdisciplinary and innovative approaches to teaching, his students have earned 10 awards since 1993 for scholarly writing in the S. Randolph Edmonds Competition for Young Scholars sponsored by the Black Theatre Network, and 2 awards for the essay competition sponsored by the Association for the Study of Afro-American Life and History.  In 1999, one of his students' plays was a national finalist in the Blank Theatre's (California) young playwrights contest, and received a residency and full Equity production.

Under his supervision, many Brown students have and continue to develop new plays in Rites and Reason's Research-to-Performance Method (RPM) process whereby scholarly research is translated into a theatre piece.  Accomplished student RPM plays are produced in Rites and Reason's annual Kaleidoscope project.  Professor Terry-Morgan's students are also recognized for their astute dramaturgy and text analysis of plays.  They have been instrumental in providing analyses to both established and emerging playwrights in the country.

His current research focuses on the development of a Black Gay and Lesbian Theatre.  His course, Black Lavender, was jointly designed by Brown students in an Odyssey Seminar, and continues to receive significant student research input and support from colleagues in the nation.  His most recent work, Heart to Heart:  Ain't Your Life Worth Saving?, a play about heart disease among women of African descent, was commissioned by the American Heart Association/Rhode Island and Lifespan Hospitals.  Produced by Rites and Reason Theatre, HEART toured 10 sites in Rhode Island during September/October 1999.  HEART was also accredited by the Brown University Medical School for 12.5 continuing medical education credits.  His current project is the continued development of the musical drama, Ophelia's Cotillion, about Turn of the Century Black Aristocrats in Philadelphia, which has received development and production grants from the National Alliance for Musical Theatre and the National Endowment for the Arts.

His plays have won numerous AUDELCO Awards (New York Recognition Awards for Excellence in Black Theatre) which include:  the drama, The Fruits of Miss Morning, and the musical Song of Sheba which was telecast on NHK-TV Japan in 1991 and toured Japan in 1992.  His article "Call and Response:  The Making of the African Grove Institute for the Arts" is the anchor article in Black Theatre's Unprecedented Times, a publication chronicling the development of the AGIA Movement spearheaded by noted playwright August Wilson. Terry-Morgan is an associate director and playwright at the National Black Theatre of Harlem, NY.  And he is the long time writer and director of the AUDELCO Awards show.  He recently served as managing editor for the Black Theatre Network News. He is a member o f AUDELCO, Black Theatre Network, National Alliance for Musical Theatre and the Dramatists Guild.


He is on the faculty of the new Brown/Trinity Consortium Graduate Program in the Theatre Arts.