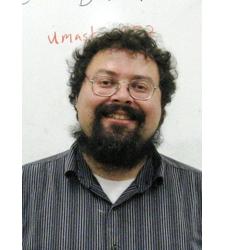 My research centers on observational cosmology, the experimental measurement of the fundamental properties of the Universe. I am a member of the LSST collaboration's weak lensing working group and head the galaxy clusters working group of the LSST Dark Energy Science Collaboration. I am a member of the WIYN ODI Science Commissioning team, and the Thirty Meter Telescope Science Advisory Committee. I have been member of the Brown faculty since 1999, and worked at Bell Laboratories and the National Optical Astronomy Observatories before coming to Brown.

The study of cosmology has been revolutionized in the past few decades by the vast improvement in telescopes, detectors, and data analysis techniques. The new observations have confirmed our general picture of the evolution of the universe from a hot, nearly homogeneous initial state, but at the same time presented new puzzles. First, the mass content of the universe is primarily in some unknown form, called dark matter, which exceeds the ordinary atomic matter by a factor of about 5. Second, the universe is accelerating its expansion, a condition that must be caused by some (unknown) dark energy. Discovering the nature of the dark matter and the dark energy, and understanding the role they play in the formation of the galaxies, clusters, and superclusters of galaxies we see today is now the most pressing task facing cosmologists.

Within this context, I am involved in several projects aimed at addressing the nature of the dark matter and dark energy and the evolution of the structures we see, using a variety of astrophysical techniques.

I am involved in two separate major projects that use gravitational lensing to measure the matter and energy content of the universe.
Gravitational lensing uses the warping of space-time that Einstein's General Relativity predicts for mass-energy as a tool; by investigating the distortion of distant objects, one can reconstruct the matter and energy that lies between us and the distant universe.
In general, the distortions are small, and must be analysed statistically--this is known as the field of weak lensing.
The two weak-lensing projects that occupy most of my time are
the Large Synoptic Survey Telescope (LSST) a major ground-based telescope project which will begin operations in 2020, and a large survey of nearby clusters of galaxies using the Dark Energy Camera (DEcam).

Professor Dell'Antonio is the recipient of an National Science Foundation (NSF) CAREER award and of a 2002 PECASE (Presidential Early Career Award for Scientists and Engineers) award from the White House office of Science.

The courses I am teaching in 2005-2006 are PH0027 (fall) and PH0128 (spring). PH0027 (Introduction to Astronomy)
is an introduction to the study of astronomy geared to concentrators in the sciences (or those comfortable with mathematics).
The course is taught seminar-style, with emphasis on student interaction and on hands-on demonstrations. In addition, there is a significant laboratory component using the telescope facility on the roof of Barus&Holley as well as Brown's historic Ladd Observatory and the ``dark(er) sky" site at Jerimoth Hill. PH0128 (Introduction to Cosmology) is a rigorous junior-level course intended to introduce students to the theory and experiments that inform our understanding of the Universe. The topics covered range from General Relativity and the mathematical description of the expanding Universe to the search for Dark Matter and Cosmological Inflation.