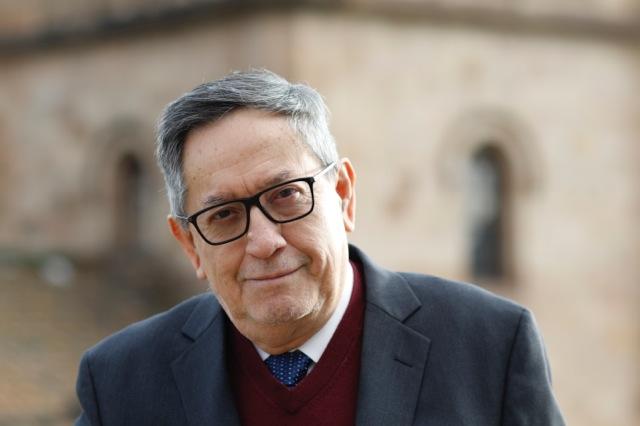 A native of Peru, Professor Ortega is an accomplished scholar, poet, playwright, and novelist, with 15 books as well as several critical editions to his credit. After six years of teaching at the University of Texas at Austin, and two years as professor and chairperson at Brandeis University, Professor Ortega joined Brown's Department of Hispanic Studies in 1989. He has also been a visiting professor at numerous universities both in the United States and abroad, including recent terms as Simon Bolivar Professor of Latin American Studies at the University of Cambridge (1995-96) and Catedra de Estudios Avanzados at the Universidad Central de Venezuela (Summer 1995).

Professor Ortega's commitment to literature goes beyond his own writing and teaching to include his involvement in several international publishing houses - he was Director of the Serie Futura of the Biblioteca Ayacucho (Caracas), Coordinator of the Editorial Council, Archives Collection (Paris), and Co-editor of the series Archives (University of Pittsburgh)- and on the advisory committees of a number of academic journals. Currently, he is director of the series New Humanities at the Iberoamericana academic series (Madrid), and the editor of the Carlos Fuente's Works (Mexico).

His teaching and research interests include twentieth-century Spanish American literature and culture, and literary theory. He is credited as the founder and leading scholar of Transatlantic Studies, that started at Brown' Hispanic Studies department 20 years ago. He organized with colleagues and students seven large international conferences on Transatlantic readings at Brown, and six annual Transatlantic workshops at Universities in Spain, and an bi-annual series on transatlantic readings of Cuban, Chilean, Peruvian, Mexican and Argentinean literatures in cooperation with local Universities.

For the last ten years I have been working on "Transatlantic Studies," a new area of studies that we at Brown helped to start. It is dedicated to the cultural history of travel, exchange, translation, mixture, contact, and appropriation of European models and representations by the New World chroniclers, artists, and writers. This intense exchange has shaped the universal setting of cultural production in the Americas as well as its sense of difference.

The Trans-Atlantic Project at Brown University

The Trans-Atlantic Project at Brown University is an academic initiative based at the Department of Hispanic Studies and supported by Latin American Studies that, since 1996, has been working to advance research, teaching, and conversation among Brown faculty and students on issues related to the new area of "transatlantic studies." Among these issues are the cultural history of exchange between Spain and the Americas, post-colonial representations, the role of Spanish in the U.S., the French avant-garde and its Atlantic dialogue, as well as exile and migrations. The theoretical ground of this research is based on the modern mechanisms of cultural exchange, identity formation and hybridity, geo-textualities, and communication in the new Humanities.

Our Project has organized a series of forums, colloquia, and seminars around transatlantic issues at Brown University, Dartmouth College, Universidad de Puerto Rico, and Universidad de Guadalajara. Last year we co-sponsored a seminar on Criticism and Literature in Mexico (with the Universidad Nacional Autónoma de México), and a colloquium in Madrid on Exile between Spain and the Americas (with the Universidad Complutense de Madrid). Four members of our study group were there. President Ruth Simmons has recommended us to explore the possibility transforming the Trans-Atlantic Project into a center or program at Brown. Nevertheless, we prefer at this moment to consolidate our faculty base and to continue as a research group open to the faculty initiatives. In the near future we have indicated our willingness to be part of the Brown Humanities Center.

In the Department of Hispanic Studies we have a new position on transatlantic studies, dedicated to Early Modern Spain and Spanish America. We hope that this new faculty member, Prof. Nicolas Wey-Gomez, will take a leading role in the Project. Also, during the fall of 2003, the Capstone seminar (required for Hispanic Studies' concentrators) was dedicated to transatlantic issues, and most of the colleagues from our group took turns to lecture at this course.

Trans-Atlantic studies has grown from the reconsideration of Europe and the America's modern process of cultural exchange and later inquiries concerning early modern colonial/metropolitan interactions, and has been invigorated by post-colonial theory and migration and border studies. In the Humanities, it tends to focus on the cultural configuration of styles and forms that moves back and forth between Europe and the Americas, as well as on translation, travel literature, and dialogical works of fiction. It could be argued that Trans-Atlantic studies belong to the present "post-theory" situation (defined by Ernest Laclau as the need for more empirical work). Also, this new area follows the advice advanced by cultural history: to be free of enclosed positivistic disciplines but also from the hermeneutics of merely discursive "constructions."

Our faculty group has gained some national and international attention thanks to its open, inclusive definition of the area as the exploration of cultural encounters between Europe and the Americas through its border-crossing agents and agencies, texts and practices. Because of our academic training, some of us were initially inclined to focus on the Spanish language and culture in Spain, Latin America, and the United States, which includes the study of migration, exile, translation, and communication. Nevertheless, in the last two years our group has been including colleagues from other departments (French, Comp Lit, Latin American Studies, English), as well as colleagues from other universities, such as Dartmouth College, Harvard University, Boston University, University of Puerto Rico, and El Colegio de Mexico and Universidad de Guadalajara, in Mexico. These colleagues have helped us in opening the focus of the Project.

Our first experience as a group goes back to 1997 when four colleagues from Brown's Department of Hispanic Studies and another colleague from Afro-American Studies went to Cambridge University for a first colloquium with our Hispanists colleagues there. We called this first meeting "Iberoamerican dialogue." Then, a group of Cambridge colleagues, including members of their Center for Latin American Studies, came to Brown for a second colloquium that added to our own Latin American Studies. The presence at Brown of the Mexican writer Carlos Fuentes (Professor-at-large in Hispanic Studies), a transatlantic figure of worldwide impact, helped us in developing a second series of dialogues at Brown with colleagues from neighboring universities as well as from Mexico and Spain. In 1999 seven professors from Brown University, Harvard University, Dartmouth College, and Boston University went to Madrid, London, and Cambridge for a series of forums already focused on Trans-Atlantic explorations. A similar group went to Dartmouth College the following year to participate in a symposium on Mexican cultural issues. In 2000, the Universidad de Puerto Rico invited us to participate in a colloquium on the Trans-Atlantic Caribbean, and last year we were invited by the Universidad de Guadalajara to a three-day conference on Trans-Atlantic Mexico with colleagues from four Mexican universities. This was an extraordinary occasion that allowed us to advance the thesis that Mexican modern literature was the product, not only of national history, but also of French, English, Spanish, and American interactions. Instead of imposing a European model, this global view revealed new cultural particularities and even local and regional differences. In the process of sharing papers on intellectual history, travel literature, archeology, cinema, art, and translation, we all experienced the rich potential of a new approach.

The products of our meetings are appearing in a series of publications. Signos , the academic journal from the Universidad Metroplitana de Mexico, has dedicated a special issue to our inquiries; Iberoamerica (University of Berlin) has dedicated its 2003 issue to a selection of our papers at the Guadalajara meeting. The University of Western Ontario, Canada, was also inspired by our work and has started the first interdisciplinary course dedicated to Transatlantic studies. Their journal, Research on Comparative Literature , opens its issue No. 14 with a piece by one of our project members. The Mexican publishing house Fondo de Cultura Económica has published two volumes with the proceedings of our first academic conferences, Mexico transatlántico (Brown/Universidad de Guadalajara) and Geografías literarias del XXI (Brown U.). Papers from the last international conference have appeared in two special issues of La Torre (Universidad de Puerto Rico).

My teaching explore new conceptualizations of Latin American literature and culture. I teach graduate seminar on the Indegenous chroniclers, Latin American literary theory, Poetry and politics in Cesa Vallejo, Poetics of Change in the New Latin American Novel, as well as transatlantic issues. Recent courses follow the workshop model, to engage students in the practice of scholarship, critical reading, and theoretical views.