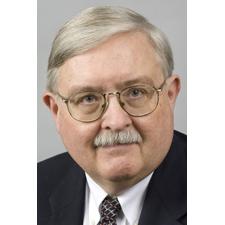 Our research is in the field of bioorganic chemistry. We have
been interested in the replacing some of the canonical DNA bases, A,
T, G and C, with base analogs that act as universal bases. A
universal base replaces one of the Watson-Crick bases but does not
base pair. The stability of a double helix is the same no matter
which base is opposite the universal base, and ideally the duplex
would be as stable as if it contained a normal base pair. This work
has led us to prepare base step analogs, in which two adjacent bases
along a strand are replaced with a single organometallic derivative.
Such a structure preorganizes the duplex into a helical conformation.

A second area of research is in the field of chemical
communication. While humans are highly visual, many animals depend on
the chemical senses, taste and smell, for mating, kin recognition,
food location, etc. Since many of these signaling chemicals are
highly active, they are given off in trace amounts. We are studying
ways to use silica areogels, which are highly porous, almost
cloud-like materials, to concentrate odors and then release them into
analytical instruments where they can be identified.