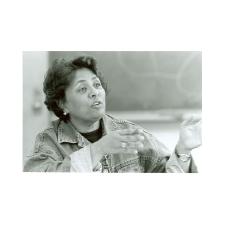 Professor Fruzzetti joined the Anthropology Department at Brown University in 1975. She holds numerous national and international professional appointments and has taught at the universities of Khartoum, Dar Es Salaam, University of Helsinki and ISCTE (Lisbon), and IIT Gandinagar (Ahmedabad, India. She has co-chaired the Year of India at Brown University and served as the director of the South Asia Studies undergraduate major. She currently serves on URC, IRB, and continues to be involved with the Woodrow Wilson National Fellowship Foundation Dissertation Grants Selection Panel, (MMUF)

Within social anthropology, Fruzzetti's specialty is in the relationship between kinship, marriage, and rituals and the meaning of the construction of gender in India. She has done extensive work on caste and the life cycle rites of Hindus; now addressing the recent structural changes to the institution of marriage and what constitutes the person. She works on two world regions, India and North East Africa covering Muslim and Hindu based societies.

Her research on nationalism and post colonial studies has taken her to a more comparative approach questioning the feminist movement, and the problems and politics of identity and citizenship within Islam and Hinduism. In addition to the primary research work in India, her new focus is on East and North African communities and the changing focus of religion and politics

Building on her earlier scholarship, she began her recent study of structural changes to the institution of marriage and what constitutes the new meaning of personhood. This research has driven her attention to a more comparative approach that considers the Indian feminist movement, and the problems and politics of identity and citizenship within Islam and Hinduism in India. Underlying this work is the question of the identity of the woman-citizen, resurrecting issues of nationalism within post-colonial studies, completing five years of research that resulted in a new book on feminism, nationalism and the post-colonial question of religious identity and citizenship in India.  Her interests in visual anthropology took me beyond using films to teach. I co-directed four documentary films on varied themes and topics about the communities have studied. Her current documentary work-Bishnupur Lives- looks at the changes of an urban town in West Bengal (India) over the last forty years.  

 Khalfan and Zanzibar . Directed by Fruzzetti, L., Ostor, A., and Guzzetti, A.

Her recent documentary film about an Eritrean woman whose life spans four continents and three colonial regimes, over a period of seven decades. This study analyzes her life in Eritrea under Italian colonial rule and Ethiopian occupation, her life as a refugee in Sudan, and finally her return home to a liberated, independent Eritrea. The study centers on her life experiences, trials, and accomplishments, as well as her transnational family and how her experiences inform our interconnected, global world.

2006: A grant from Carnegie Corporation of New York for an ethnographic case study on an Eritrean woman's national and transnational experiences

1995-1996: National Institute of Health (through the Minority International Training and Research Department of Howard University), support for summer research for ongoing research in central rural Ethiopia on "The Social Production and Migration of Disease in Southern Ethiopia"

1995: National Institute of Health (through the Minority International Training and Research Department of Howard University), support for summer research on the "Social Production and Migration of Disease in Southern Ethiopia"

1995: President's Fund, support to initiate new research on gender, health and the spread of diseases in Ethiopia

1994: Research support from the Center for the Comparative Study of Development for summer research in Ethiopia

1994: Odyssey Grant for summer research on new course on Race, Culture and Ethnicity in America

1993: Travel grant, Center for the Comparative Study of Development, to begin pilot research in Eritrea/Ethiopia

1991: Curricular Development Grant to offer new course, Anthro 108, "The Culture and Politics of Colonial Cities: Calcutta and Sekondi-Takoradi," as a Modes of Analysis course with Afro-American Studies

1990: Research and travel grant from Development Studies to undertake research in India

1990: Mellon Fresh Combination Grant to teach a graduate seminar on "Gender and Representation in Ethnography and Literature"

1989-90: Smithsonian Grant to complete work on the film Seed and Earth

1988: Smithsonian Grant to initiate documentary film on The Ritual and Physical Uses of Rice in India

1987: The Francis Wayland Collegium Planning Grant, for summer research on "Calcutta, the social and cultural city"

1983: Planning grant from the Fund for the Improvement of Post Secondary Education (FISPE)

1982: The Francis Wayland Collegium Planning Grant on the social and cultural constructions of "Calcutta: The City"

1978: Grant from the Economic and Social Research Council (National Council for Research, Sudan) for research and fieldwork in Sudan

1976: Henry Merritt Wriston Grant for Improvement of Education, Brown University, to prepare for a course on the comparative approaches of Islam and nationalism in Sudan and Senegal

1971-73: American Institute of Indian Studies, travel and research grant for study in India

Fruzzetti, L., and Perez, Rosa Maria. 2002. The Gender of the Nation: Allegoric Femininity and Women's Status in Bengal and Goa. Ethnographica 6, 1 (Lisbon , ISCTE).

Award for best cinematography for Fishers of Dar at the Ann Arbor Film Festival. The film was selected for a traveling festival to be screened at 25 venues around this country.

Showing of Fishers of Dar at the Open House Festival at the Kennedy Center, Washington, D.C.

Award for Excellence in Teaching, presented by ONYX

Awards for the ethnographic film Seed and Earth , coproduced by L. Fruzzetti, A. Guzzetti and A. Ostor.

Premier at Wesleyan and Brown

Awarded the Sarat Chandra Roy Memorial Medal by the Asiatic Society, for outstanding work on anthropology of India.

Honored at second annual Celebration of Black Scholarship in New England, at the University of Massachusetts, Boston, MA.

Member of the Bengal Studies Association

Member of the Leadership Alliance

Anthro 90, Culture and Politics of Colonial Cities, This undergraduate course attempts to understand the nature of colonialism in Africa and India. Comparative methodological approach to the study of colonial cities introduces the students to a multiple and interlocking idea and symbols used by colonial power to create in their images, cities which reflect their own image. The colonial power for the study of these two cities is the British Empire, whose policies in Asia (India) differed from that of Africa (Ghana

Anthro 106, Culture, Race & Ethnic Politics is a seminar where I develop the scientific and biological debates, philosophies and beliefs underscoring the concept of race, followed by discussion of what constitutes the meaning of ethnicity, culture and the citizenship. We use anthropological and socio-historical literature on race as well as life histories of different communities in the USA. The class is divided with students selecting to study one of four American minority communities under consideration. Student groups meet individually to work on and discuss the chosen topics for research.

Anthro 117, People's and Cultures of India is an undergraduate course, which covers aspects of Hinduism and Islam in India. The course combines texts, novels and films to explore issues of caste, gender and kinship relationships, contemporary politics and religious difference amongst the different Indian communities.

Anthro 130, Themes in Anthropology a seminar for majors in anthropology. A theme I choose to develop is the anthropological notion and idea of "culture". The seminar covers major anthropological classics and related these theories and studies to contemporary ethnographies and treatment of anthropological analysis. I begin the seminar by lecturing the first hour on a topic, followed by a number of students to lead the discussion and report on select articles from the recommended weekly readings. The class participates in raising questions and debating the weekly thematic issues. The discussions facilitate and assist in relating various theories to contemporary anthropological concerns and to the changing definitions of "culture". From the discussions and the weekly readings, along with the expected one page paper, I can evaluate and assess how effective the course was conducted and what were the major failings.

Anthro 134, Comparative Sex Roles. Addresses the topic of construction of gender within specific cultures. The comparative approach and case studies selected from Africa & Asia, portray women's societal roles and status cross culturally. Goals and mission of the course is to present ethnographic representations of women and the underlying question is to how one understands differences within culturally contextualized structure.

Anthro 138, Seminar on Women in Socialist, and Developing Countries. This seminar, jointly sponsored by a sociologist and an anthropologist, explores the changing role of women in the former socialist countries of Eastern Europe and developing countries in Africa and Asia. The course covers the position of women in the personal as well as in the broader social, economic, and political context. We discuss prevalent ideologies and choices within these contexts across national lines

Anthro 1250, Film and Society, a course that examines representations of Indian society through film, anthropological literature and film studies.  Films in particular, allow us to comprehend the intricate links built on the formation and development of how national identities are both crafted and created through visual metaphors.  More specifically, the course seeks to examine and explores the connection between the symbolism of images and the changing meanings of ideas, making comprehensible anthropological concepts of Indian culture, family, values and tradition.  Film imagery will help us to clarify different societal images created for the cinema.  Borrowing on the idea of invented traditions, we will compare how gender, religious practices and intolerance, terrorism and national identity, and or historical events are consciously portrayed visually through films and literature.  Issues about authenticity, meaning and representation in the popular imagery of Indian film vs. anthropological writing are a central concern of this course

Anthro 2320, Ideology of Development, a graduate seminar, deals with different theoretical approaches and theories related to the question and meaning of development. Our focus will be to understand what underlies the relationship of theories and development models to the developing world.  Through the analysis of targeted development programs, we will examine the goals and objectives of Western as well as indigenous notions of progress, the significance of growth and change within a social and cultural context.  Development objectives will be considered alongside the politics of aid and the ideology of what constitutes “aid” to the beneficiaries.  Using select Third World countries as case studies we will concentrate and question many inter-related issues such as the “significance and implication” of development, relationships between theory and practice, gender and development, agricultural strategies and the politics of the international markets. Additionally we will examine and deliberate the outcome of economic growth to the urban/rural dichotomy and the resulting structural changes, the effects of structural adjustments and the socio-political predicament of nation states today.  Western conceptions of “progress” disguised through theories of modernizations will be scrutinized to consider cultural alternatives and choices to economic problems

Anthro 205, Ethnography and Literature: Representations of "Woman, Native, Other", This interdisciplinary graduate seminar will address the cultural construction of subaltern groups under the signs of "woman", "native" and "other" in texts generically differentiated as ethnographic and fictional. As part of critical endeavor, the seminar will raise questions about "truth" genres, the interpretive anthropological project of "writing culture" and the production of a hegemonic discourses on "woman, native, other". By turning to the texts and counterdiscourses of the subalterns, we hope to discuss and problematize issues of empowerment and authority as they relate to self-representations by the dis-empowered, the production of cultural fictions-autoethnographies by such groups as political acts of self-empowerment, and to explore the possibilities for ethnographies of "fiction". Much of our material will focus on the cultures of North and West Africa, and the North American African Americans.

Anthro 237, Colonialism and Neo Colonialism, a graduate seminar, one that draws students from diverse disciples. The underlying theme of the seminar is a comparative analytical approach to the study of colonialism in East and West Africa, deciphering the difference between English and French political rule, and the effects of colonialism on contemporary African Anglophone and Francophone countries.