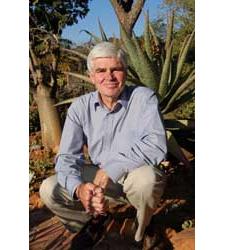 Professor Heywood's teaching at Brown has spanned a series of courses from introductory plant biology to advanced cell biology. He has been honored with the Senior Class Citation (three times), the Hazeltine Award (twice), the Leduc Award for Teaching Excellence in the Life Sciences, the Sheridan Award for Distinguished Contribution to Teaching and Learning, and the National Science Teachers Association Award for Innovations in College Science Teaching.

He has served Brown on many committees, and has been both a Dean and a Resident Faculty Fellow. He successfully proposed major changes to the academic calendar which were adopted in 1983.

Professor Heywood values academic advising and is both a concentration advisor and first year student advisor.

Professor Heywood has published on cell structure and function in protists, in particular, the flagellar apparatus, cytoskeleton and mechanisms of mitosis in raphidophycean algae.

His interests also include the interface between biology and environmental science, for example, the role of agricultural intensification (the Green Revolution and agricultural biotechnologies) in providing food for expanding human populations while also maintaining the sustainability of environmental resources. See: Messer, E., and Heywood, P.  1990.  Trying Technology.  Neither sure nor soon.  Food Policy 15:336-345.

Currently Professor Heywood is writing about quaggas, Equus quagga quagga, zebras that occurred in South Africa and were driven into extinction in the nineteenth century. This work also includes discussion of the selective breeding in South Africa of plains zebras that resemble extinct quaggas.

Biomedical Research Support Grant #5-27753
5/84-3/85 $1,000
"Structure and phylogenetic significance of the cytoskeleton in the algal class Cryptophyceae"

Association of American Colleges
7/84-7/86 $5,000
"A collaborative model for the improvement of courses for non-science majors"

The Rockefeller Foundation
10/88-9/89 $89,500 Co-PI with Ellen Messer
"An overview of agrobiotechnological choices and opportunities for LDCs"

Heywood, P. 2015. Metal casts showing the Three-dimensional Structure of the Human Inner Ear were converted into Jewelry. Otology and Neurotology 36(5): 936-940.

1978 Invited to be a speaker at a national symposium "Phytoflagellates: Form and Function".

1981-84 Appointed Fellow of the Wayland Collegium for Liberal Learning.

1984-87 Appointed to Executive Committee of the Wayland Collegium for Liberal Learning.

1987 Selected as one of ten National Science Teacher Association delegates to the NSTA-ASE Conference on Science Education.

Received NSTA-Ohaus award for innovations in College Science Teaching (one of two people nationwide to share the top award in the undergraduate college division).

Elected a Fellow of the Linnean Society of London.

Selected as Evaluator for the New England Association of Schools and Colleges.

Honorable mention in the Hawkhill Awards Competition for ideas on new ways of teaching science/technology/society through the use of audiovisual media (one of six prizewinners nationwide).

Fellow of the Linnean Society.

Fellow of the Royal Society of Biology.

In 1976 Professor Heywood developed "Plant Cell Biology" to detail the cell biology of plants and photosynthetic protists. This course, later retitled "Cell Biology and Biotechnology," was offered for many years and focused heavily on critical analysis of original papers and familiarity with research techniques. In 1985 this course was one of two courses chosen by the Institute for Research in Information and Scholarship at Brown for its Educational Software Project sponsored by the Annenberg/Corporation for Public Broadcasting Project and IBM which used Intermedia, a hypermedia system that enabled students to make their own scholarly connections in a matrix of information consisting of text, light and electron micrographs, diagrams and three-dimensional models. this was one of the first science courses taught with hypermedia. See: Heywood, P. and Yankelovich, N., 1987. "Focusing on cell biology using Intermedia."  Proceedings of the 1987 IBM ACIS University Conference, pp. 380-388.

In 1984 Professor Heywood's interests in science teaching and in collaborative learning led him to initiate the Science Mentor Program. This experimental program sought to address the needs of three overlapping categories of students: those with restricted backgrounds in science, those who were apprehensive about science courses, and those who wished to discuss science and technology in a small group setting. These students participated in an extra weekly session of the course which was led by a science mentor. Science mentors organized activities which supplemented those in the course, for example, additional laboratory sessions and demonstrations, field trips, review sessions, and discussions of some of the broader issues raised by the scientific discipline, etc. See: Heywood, P., 1987."The Science Mentor Program in Undergraduate Science Courses." J. College Science Teaching 17:212-214, 242. The Science Mentor Program won a National Science Teacher Association-Ohaus award for innovations in College Science Teaching.

In 1990. Professor Heywood developed the course "Plants, Food and People" which examines the challenge of feeding a world population that might expand to approximately10 billion people over the next hundred years. Will it be possible to produce enough nutritious food for everyone without loss of biodiversity due to converting natural habitats into farmland, or without damaging environments with agricultural pesticides and fertilizers? What will be the effects of global climate change and agricultural pests on the productivity of food plants? Will shortages of water and essential plant nutrients (such as phosphate) compromise food production? To examine these issues, the course examines the basic biology of food plants – their development, structure and functions - and evaluates the sustainability of agricultural systems including: organic farming, community supported agriculture, agroforestry, permaculture, multicropping, etc.

In 2014, Professor Heywood initiated the Freshman Year Seminar "The Lives of Plants." This course presents an integrated account of development, structure and function in plants, especially seed plants. The course follows development from the embryo to the mature plant, and examines germination, growth, functions of plant hormones and phytochrome, photosynthesis, uptake into plants and transport through plants, flowering, dormancy, and formation of flowers, seeds and fruit. The course demonstrates the fascinating structures and processes occurring in plants, and includes basic concepts in molecular and cell biology, evolutionary biology, and organismal biology.