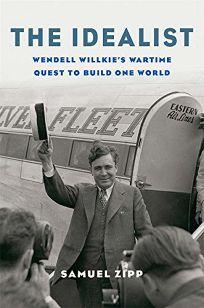 I am a cultural, intellectual, and urban historian with particular interest in United States cultural and political history since World War II, 20th century cities and urbanism, the built environment, and nonfiction writing.

My most recent book is The Idealist: Wendell Willkie's Wartime Quest to Build One World (Belknap Press of Harvard University Press, 2020). I am also the author of Manhattan Projects: The Rise and Fall of Urban Renewal in Cold War New York (Oxford, 2010) and the co-editor of Vital Little Plans: The Short Works of Jane Jacobs (Random House, 2016).

I've written articles and reviews for a number of publications, including The New York Times, The Washington Post, The Nation, n+1, Public Books, Reviews in American History, The Baffler, Metropolis, American Quarterly, American Literary History, The Journal of Urban History, Cabinet, and In These Times.

My work examines the cultural, intellectual, and urban history of the United States in the 20th century. I am interested in the interrelations between ideas, culture, and politics.

I have recently completed a study of popular internationalism, empire, and race during World War II that centers around Wendell Willkie and his "one world" ideals.  I am in the early stages of a long term investigation of the relations between "selfhood" and metropolitan form.

My first book was a new look at urban renewal in postwar Manhattan and I have also published an edited collection of the essays of the urbanist Jane Jacobs.

My most recent work concerns cultural and political internationalism in the United States during and after World War II but before the Cold War--a time when various Americans imagined a number of alternative global futures for the nation.

My book The Idealist tells the unique story of 1940 Presidential candidate Wendell Willkie’s epic journey around it world. It touches down in Egypt, Turkey, Lebanon, Palestine, Iraq, Iran, the Soviet Union, and China, and reveals a planet shrunk by aviation, war, and global demands for freedom.

I show how Willkie's 1943 best-seller, One World, challenged Americans to see the war as a fight against imperialism and racism. It reveals the years between Pearl Harbor and the founding of the United Nations as a time of American ideals tested rather than triumphant, and uncovers Willkie’s neglected efforts to create an interdependent and decolonized world rather than one shaped by competition between the Soviet Union and United States.

Willkie's celebrity at the height of the age of broadcasting meant that these ideals reached a broad popular audience in the United States and abroad. His call for “one world” directly inspired the founders of the United Nations, but his broader vision of global interdependence went unrealized, swept away by the surge of nationalism that accompanied the end of the war.  Willkie’s one world vision inspired decolonization and environmentalism, and now, in our own global times, when “America First” has again become a rallying cry in the U.S., Willkie’s vision of a multilateral and democratic world can still inspire new global idealism today.

I am also developing a long term investigation of the linked discourses of modern selfhood and metropolitan form, concentrating on changing understandings of lived everyday selfhood across the 20th century.

Much of my previous work dealt with the history of 20th century urbanism. I have edited (with Nathan Storring) a selection of the works of the writer and thinker Jane Jacobs, author of The Death and Life of Great American Cities. The book, which includes essays, interviews, and letters, is titled Vital Little Plans: The Uncollected Works of Jane Jacobs, was released by Random House in the fall of 2016.

My first book, Manhattan Projects: The Rise and Fall of Urban Renewal in Cold War New York (Oxford, 2010), offered a new look at the politics and culture of urban renewal in Manhattan in the twenty years after World War II. I focus on the ways that superblock planning and modernist architecture remade the cityscape of the postwar city and were themselves remade by resistance to their overweening imposition on the lives of ordinary New Yorkers. Urban renewal, I show, was at the heart of New York's simultaneous rise to "world city" status and fall into the "urban crisis."

The book argues that urban renewal in New York is best understood as more than a set of national or municipal policies. I believe that it was also a highly contested vision and cultural symbol, one that was shaped by its interactions with the political culture of the domestic Cold War. In the postwar era the term "urban renewal" came to be understood, by both its proponents and its critics, as a symbol of the way that superblock urban planning and modernist architecture was remaking the daily lives of city-dwellers.

Specifically, I look at four iconic postwar sites: the United Nations Headquarters complex, Metropolitan Life's middle-income housing development Stuyvesant Town, public housing in East Harlem, and the Lincoln Square renewal area that included Lincoln Center for the Performing Arts, and show how they were physically and culturally constructed as agents and emblems of urban transformation. I explain how they were pitched as cures for urban obsolescence, depicted as symbols of a new city, and received by New Yorkers as reorderings of the fundamental experience of city life.

“The Forces of Decline and Regeneration: A Discussion of Jane Jacobs and Gentrification” (with Nate Storring and Jennifer Hock), in Christoph Lindner and Gerard Sandoval, eds., Aesthetics of Gentrification: Seductive Spaces and Exclusive Communities in the Neoliberal City (Amsterdam University Press, 2021)

“Dilemmas of World-Wide Thinking: Popular Geographies and the Problem of Empire in Wendell Willkie’s Search for One World,” Modern American History, 3, 2018.

"When Wendell Willkie Went Visiting: Between Interdependency and Exceptionalism in the Public Feeling for One World," American Literary History 26:3 (Fall 2014).

“One World: The Lost Internationalism of Wendell Willkie,” The Nation, April 1, 2019.

“Remembering and Understanding Jane Jacobs, Beyond Left and Right,” (with Nathan Storring), The Toronto Globe and Mail, September 30, 2016.

"Superblock Stories; Or Ten Episodes in the History of Public Housing," Rethinking History: The Journal of Theory and Practice 17:1 (March 2013) 38-73.

"Burning Down The House," Review: Jonathan Soffer, Ed Koch and the Rebuilding of New York City and Joe Flood: The Fires: How A Computer Formula, Big Ideas, and the Best of Intentions Burned Down New York City—and Determined the Future of Cities. The Nation, December 13, 2010.

"The Battle of Lincoln Square: Neighborhood Culture and the Rise of Resistance to Urban Renewal," Planning Perspectives 24:4 (October 2009) 409-433.

"The Price Isn't Right." Review: Lizabeth Cohen, A Consumer's Republic: The Politics of Mass Consumption in Postwar America. In These Times, April 22, 2003.

"Botched Burbs." Review: Rosalyn Baxandall and Elizabeth Ewen, Picture Windows: How The Suburbs Happened and Andres Duany, Elizabeth Plater-Zyberk and Jeff Speck, Suburban Nation: The Rise of Sprawl and the Decline of the American Dream. In These Times, July 10, 2000. 19-21.

Review: Daniel Belgrad, The Culture of Spontaneity: Improvisation and the Arts in Postwar America and Thomas Frank, The Conquest of Cool: Business Culture, Counterculture and the Rise of Hip Consumerism. American Studies International 37:2 (June 1999). 109-113.

I teach courses in United States cultural, political, and intellectual life, urban and suburban history, the history and meaning of the built environment, and urban thought and theory.