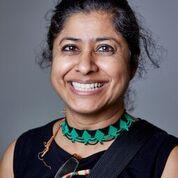 Vazira Fazila-Yacoobali Zamindar is a writer and historian of modern South Asia, with an interest in twentieth century histories of decolonization, displacement, war, non-violence, the visual archive and contemporary art. Her book, The Long Partition and the Making of Modern South Asia: Refugees, Boundaries, Histories (Columbia University Press, 2007; Penguin India 2008; Mashal Books, Urdu edition,  2014) combined oral histories with archival research to examine the significance of refugees in nation-state formation in the devastating aftermath of 1947. Stories from the book have been performed by the Delhi-based Dastangoi (Dastaan-e-Partition), and the book has been an inspiration for Mara Ahmad’s film A Thin Wall (2015), Shayma Sayid’s dance Kanhaiya yaad hai kuch bhee hamari (South Bank Center, London, August 2017), and for the San Francisco Enacte Arts’ play The Parting (2018).

Her second book, The Ruin Archive: Art and War at the Ends of Empire, takes on archaeology, art history, photography, film and war on the northwest frontier of British India, on the borderlands with Afghanistan, and has been supported by several fellowships, including the NEH, over the decade of research behind it. This work has led to investigations of Gandharan art in European collections, particularly in the Ethnologie Museum of Berlin and the Prussian Royal Phonographic Commission’s extraordinary sound archive of prisoners of war, including those from the Indo-Afghan borderlands, both now part of the Humboldt Forum in Berlin. She is also part of the Decolonial Collective on Migration of Objects and People.

When she directed the South Asian Studies Program from 2012-2016, she ran Theory from the South as an interdisciplinary reading group which now continues since 2018 as Art History from the South. She also co-organized Love, War and Other Longings, the Brown-Harvard Pakistani Film Festivals of 2014 and 2015, which is now a collection of essays on cinema in Pakistan (Oxford University Press, 2020).

With a commitment to public engagement, she has been involved in organizing teach-ins on campus, and has worked with Primary Source and the Choices program, FirstWorks Providence, the RISD Museum, as well as the Lahore Museum. She has appeared on Christopher Lydon's Open Source Radio and the BBC Radio series Museum of Lost Objects, and her articles have appeared in the Third Text Online, Times of India, The News, Dawn, Time Out Delhi, Caravan, Current History and The Wire.