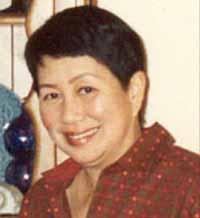 Wanni W. Anderson received her BA (honors)( English) from Chulalongkorn University, Bangkok, Thailand, in 1959, MA (English) from Brown University in 1962, Ph.D. in Folklore and Folklife, Anthropolgy Focus, from the University of Pennsylvania in 1973, and from Harvard University a posdoctoral in Psychological Anthropolgy in 1981-82 and in 1982-83 a postdoctoral in the Cross -Cultural Studies of Adolescence

My current research "Shee: A Historical Ethnography of Selawik" aims for a book, co-authored with Douglas D. Anderson. It is based on several visits to Selawik viilage in northwest Alaska, including a full-year ethnographic study in 1970-71. The historical discussion derives from Douglas Anderson's archeology of four sites on the Selawik River, reports of school teachers/missionaries before Alaska became the 49th state of America, the establishment of a village trading post, and the federal introduction of reindeer herding into the area. Amidst Inupiaq self-determination movement, television, cell phone, and electircity, it will bring the readers up to date to what this arctic village has evolved to in the millenium.

UTRA Grant, Brown University, for undergraduate teaching assistant for AN25 (UC56): Growing Up Ethnic and Multicultural. 1996 ($5,000)

Research grant to study Laotian refugees in Rhode Island, Center for the Study of Race and Ethnicity, Brown University. 1991. ($300)

Odyssey Grant of Ford Foundation to Brown University, for the preparation of a new course, "Growing Up As An Ethnic Ethnicity." Summer 1988. ($1,000)

Folktales of the Riverine and Coastal Inupiat. Northwest Arctic Borough and National Endowment for the Humanities, 2003.

"Ethnicity in Action: Thai Muslim Ethnicization in the Thai Nation-State." Accepted for publication in Journal of the Siam Society, Bangkok.

UTRA Grant, Brown University, for undergraduate teaching assistant for AN25 (UC56): Growing Up Ethnic and Multicultural (1996)

Research grant to study Laotian Refugees in Rhode Island, Center for the Study of Race and Ethnicity, Brown University (1991)

Odyssey Grant of Ford Foundation to Brown University, for the preparation of a new course, "Growing Up As An Ethnic Minority" (Summer 1988)

Chandarabhod Award as the top student in English in the graduating class of 1959, Chulalongkorn University, Bangkok, Thailand (1959)

AN25, ET26 "Growing Up Ethnic and Multicultural". This course explores the complex issues of growing up as an ethnic, bicultural, or a multicultural person and how these dual or multiple identities affect or interact with individual behavior, priorities, the sense of self, and how individual identity is formulated and defined. Cross-cultural and interdisciplinary approaches combining anthropology, comparative human development, interethnic communication, life history, and literary works are used


AN125, ET121 "The American Experience: The Southeast Asian Refugees/Americans" This course explores the diaspora of the Cambodian, the Hmong, the Lao, and the Vietnamese American from their initial exodus from their war-torn countries to their strategies for reconstructing new lives. Topics include socioeconomic changes, changing family life, gender roles, life choices, and the growing American generation. Materials used include films, songs, and autobiographies written by the refugees/Americans themselves.


AN122, ET122 "Ethnic American Folklore: Continuity and the Creative Process". This course investigates the dynamics of cultural continuity and the creative process involved in ethnic American folklore from oral narratives, life history, to foodways, sports and songs. How do these cultural forms intersect with ethnicity, gender, group activism, and transnational contacts and exchanges? What are the new cultural forms, communication milieus, and venues negotiated or contested in contemporary America?