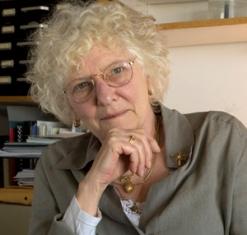 Professor Emerita of History of Art and Architecture

Professor Zerner's areas of interest include the history of art and architecture in Latin America, particularly with respect to the histories of landscape design, buildings, and cartography.

Professor Zerner is completing a study of Europe's first image of the Aztec capital of Mexico (the 1524 Nuremberg map of Tenochtitlán) and its impact on European urban thought. Other projects include: The Invention of Pathos: Spanish Polychrome Sculpture of the Golden Age, 1520-1700 , a related study of Corpus Christi processions in Colonial Latin America, and a book length study, Building and Landscape in the Early Modern World . A conference on the art of festivals in Latin America was organized and held in the spring of 2006.

Research on the map of Tenochtitlán and European urbanism is being funded by Salomon Faculty Research grant from Brown University (2005-2007).

Work on Spanish polychrome sculpture and related topics in Latin America were funded by a sabbatical grant from Brown University and a Cogut Grant.

Research on the history of cartography and preparation of undergraduate seminar (Spring 2006)was funded by a Wriston Curricular Development Grant from Brown University.

The work on relations between landscape and building in the early modern world was funded in part by a John Simon Guggenheim Foundation Fellowship for 1996/97.