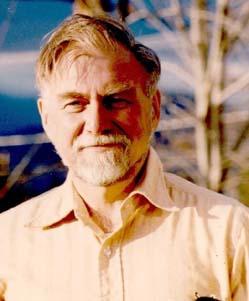 In 1960 Anderson graduated in Anthropology (major) and Geology (minor) from the University of Washington before going to Brown University as the first graduate student in the field of anthropology thee, with a focus in Arctic anthropology. After his MA in 1962 he spent a Fulbright year in Denmark studying Arctic collections at the Nationalmuseet and excavating in Godthaab Fjord, Greenland. He then attended the University of Pennsylvania, where he received his Ph.D. 1967. He began teaching at Brown University in 1965, and in 1973 developed the department's Laboratory for Circumpolar Studies, located at the university's Haffenreffer Museum of anthropology, Bristol Rhode Island.
In the 1970's he expanded his research interests to include Southeast Asia, with a focus on Pleistocene and Early-Middle Holocene archaeology.

ANTHROPOLOGY 50: INTRODUCTION TO ARCHAEOLOGY AND HUMAN ORIGINS
This course is an introduction to the biological origins and cultural developments of mankind over the past 4 million years, addressing the following: (1) human evolution; (2) methods and aims of archaeological research; (3) human dispersals; (4) hunting, fishing and gathering lifeways; (5) beginnings of settled life, agriculture, and animal domestication; and (6) the rise of complex societies.

ANTHROPOLOGY 101: GLOBAL ORIGINS OF PLANT AND ANIMAL DOMESTICATION
The course discusses the ideas on and archaeological evidence for the origins of food production and their impact on human society worldwide, focusing on biological and social processes that led to food production in different parts of the world.

ANTHROPOLOGY 110: CIRCUMPOLAR ETHNOGRAPHY
The course looks at the indigenous peoples of the northern circumpolar region from Scandinavian Lapland through Siberia, to northern North America and Greenland. The lifeways represented are varied and unique, influenced by the need to cope with long, extremely cold winters and short summers and with experience as citizens of the nation states in which they live. Residing within the borders of seven different nation states (Norway, Sweden, Finland, Russia, United States, Canada, and Denmark/Greenland), each administered by a different set of policies, the groups provide an excellent comparative basis to examine the impact of modern political environments and extreme northern environments on indigenous lifeways.

ANTHROPOLOGY 114: NATIVE AMERICAN CULTURES
The course is a survey of the traditional and contemporary Native American cultures and society, emphasizing the varieties of their lifeways and views of life and of the world. A portion of the course will be devoted to early ethnographic descriptions, but the emphasis will be on those aspects of culture (artistic, folkloristic, and religious expression, attitudes toward the natural world, and adaptations to changing US and Canadian national societies) that continue to have relevance to Native Americans today.

ANTHROPOLOGY 119: NATIVE NORTH AMERICANS IN THE TWENTIETH CENTURY
The course examines current issues faced by Native Americans as a result of U.S. Federal American Indian policy since the beginning of the last century. The Native American experience, as seen through oral and written accounts will be compared to and contrasted with Federal and State perspectives as manifested in policy and legislation. Topics include anthropological approaches to contemporary Native American culture, ethnic identity, and interethnic relations in the modern national context.

AN 120: ETHNONATIONALISM:THE ASIAN ARENA (Joint with Wanni W. Anderson)
Three Asian countries: The People's Republic of China, Thailand, and Indonesia provide unique national arenas in which are examined specific definitions, representations, and contentions among nationalistic discourse, ethnic legitimization, and ethnonationalism as they are played out in response to cultural politics, national ideology, specific historic moment, transnational politics, religious identity, and ethnic identity.
Three sets of contesting paradigms that solidify or mobilize ethnonationalistic movements form the theoretical and comparative frameworks for the course: 1) majority - minority relation and cultural politics within a specific country; 2) religion in national ideology and ethnic/religious nationalism; and 3) nationalism and ethnic identity as challenged by external forces (colonialism and transnational politics)

ANTHROPOLOGY 121: NATIONS WITHIN STATES (Ethnonationalism: Relations between Indigenous Societies and Modern Nation-States)
This course explores the anthropology of nationalist sentiments among indigenous groups living in modern nation-states. Some of the issues to be addressed are: (1) the asymmetrical power relationships that exist between many indigenous ethnic nations (variously called Fourth World Nations, First Nations, or Indigenous peoples) and the modern nation-states within which they reside and (2) interactions of ethnicity, tribalism, and nation-building in today's world. Case studies of indigenous groups are drawn from all parts of the globe..

ANTHROPLOGY 155: CIRCUMPOLAR ARCHAEOLOGY
The course traces the cultural development of Arctic peoples from their earliest known beginnings to historic times with a special emphasis on the peoples of northern North America. The course will be more than a simple survey of the archaeology. It will focus on a series of specific problems which will also have relevance to general archaeological and anthropological questions: environmental archaeology, "Early Man, "settlement archaeology; archaeology of complex societies, engendered archaeology, and ethnoarchaeology.

ANTHROPOLOGY 156: THE ARCHAEOLOGY OF ASIAN CIVILIZATIONS
Since at least Neolithic times, Asia has witnessed the development of major civilizations, from Southwest Asia to Japan and from North Asia to Island Southeast Asia. Although each civilization developed its own "genius," writings, economies, political institutions and religions, they were in constant and intimate contact with each other. Developments in one region were quickly passed on to other regions - plant domestication, metallurgy, ideas of governance, etc. - achieved through the expansion and occasional migrations of populations, through trade, and through interregional political involvements. The course examines the proto- and early historic archaeologies of Asia and the spread of culture and the interactions of peoples across the continent from about 1000 BC to AD 1000.

ANTHROPOLOGY 157: AMERICAN INDIAN ARCHAEOLOGY
The course traces the development of North American Indians and culture through a comparative study of prehistoric
archaeological remains. Some questions addressed are: 1) when, where and why did people first migrate into North America; 2) were these people responsible for the mass animal extinctions at the end of the last Ice Age? 3) in what ways has climatic change influenced culture change of the American Indians; 4) what accounts for the similarities and differences in the politics and economies of Native Americans; 5) when, where and why did Native Americans develop agriculture; 6) what are the meanings attached to the landscapes, art and architecture of early Native Americans; and 7) how do one's theoretical orientation and questions about the past influence archaeological interpretations?

ANTHROPOLOGY 198: SENIOR CONFERENCE
The Senior Conference is designed for fourth-year anthropology concentrators to examine anthropological method and theory in the context of today's understandings, concerns, and applications of social science, with a special emphasis on research methodology. The course is intended to be a seminar, with the primary contributions given by the participants. The specific topics for the course will be partly geared to your particular interests and background.

ANTHROPOLOGY 250: PROBLEMS IN ARCHAEOLOGY: THE ARCHAEOLOGY OF EMPIRE
By examining early complex states and empires in the New World, Africa, and Eurasia we explore why and how states frequently expand to encompass neighboring states and how we can identify the process of empire-building archaeologically. The problem of empire will focus on economic and environmental factors and the link between power and symbol.

ANTHROPOLOGY 270: PRINCIPLES OF ARCHAEOLOGY
The aim of the seminar is to examine archaeological method and theory in the context of the general field of anthropology, which itself is embedded in the disciplines of social sciences and humanities. This is one of the core seminars for first year graduate students in Anthropology.

ANTHROPOLOGY 273: ARCHAEOLOGICAL RESEARCH METHODS, THEORY AND PRACTICUM
The seminar is designed to help the student develop research skills in archaeology. By focusing on the relationship among theory and methodology, research design, analytic techniques, and the development of research proposals and/or reports, we shall examine how both scientific and humanistic theoretical concerns can be sources of meaningful archaeological questions, and how these questions can be transformed into viable research problems.
The course is open to advanced archaeology students who have already had experience in archaeological field research and analysis. Each student is expected to have a clear idea of his/her particular research interests prior to entering the course. Ideally, the student will already have generated his/her own archaeological data which can be used to contextualize the various seminar issues, but if the student so desires, data previously obtained by the instructor will be made available.

ANTHROPOLOGY 261: CIRCUMPOLAR ARCHAEOLOGY
The seminar provides a foundation in the archaeology and archaeological research in the Arctic. Inasmuch as this is an advanced course it will be tailored to the particular needs of the participants. The general theme will be an exploration of problems concerning the cultural development of Arctic and sub-Arctic peoples (Eskimos/Inuit, Aleut, Northern Athapaskans, and Northern Algonkins) as derived from archaeological, ethnohistoric, and ethnographic data, with particular emphasis on the late prehistoric and early historic periods. The class discussions will include an evaluation of the questions addressed and methodologies utilized by the various northern researchers. A thorough familiarity of the anthropological literature on the north will be stressed, and to this end each participant is to develop an annotated bibliography that can be shared with the others.