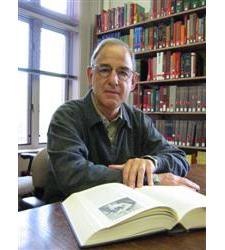 David Josephson received his B.A., M.A., and Ph.D. in music from Columbia, where he also directed the Concert Band for three years and helped edit the journal Current Musicology. He taught at Brown from 1972 until his retirement in 2016. He founded and directed the Brown Early Music Group in 1972-1979, chaired the Music Department in 1979-1985, was instrumental in the creation of the Orwig Music Library, initiated an artists-in-residence program around a campus-based string quartet, supported creation of a jazz program, and brought Brown its first professional music theorist. He is author of Torn Between Cultures: A Life of Kathi Meyer-Baer (2012), Conversations with Ella Grainger (1993), John Taverner: Tudor Composer (1979), and numerous articles and review-essays on the musical emigration from Nazi and Fascist Europe, the composer/pianist Percy Grainger, and Taverner. He is also recipient of the Festschrift, On the Third Hand (2016). He taught courses on Baroque and Classic music, Mozart, Beethoven, conductors and conducting, the culture of death in nineteenth-century Europe, liturgical and religious music, the sociology of twentieth-century music, and the European musical emigration of the 1930s. He plans to write a book on the émigré music scholars.

My current research examines the forced emigration of musicians and music scholars from Nazi and Fascist Europe, 1933-1945. Having published a biography of the émigré music scholar Kathi Meyer-Baer and published four major articles on various facets of the subject, I am planning a second book about two extraordinary organizations and the émigré music scholars whom they supported as those scholars sought to re-establish themselves and their careers in the United States and the United Kingdom.

My current research examines the forced emigration of musicians and music scholars from Nazi and Fascist Europe from 1933 to 1945. It began with the assembly of a comprehensive database. The flight of Europe's music had an overwhelming impact on the transmission of a great musical tradition from Europe to America. The forced emigration redefined the terms of the production, performance, and dissemination of that tradition and redrew the musical landscape of the societies that provided its refuge, most notably the United States. Of course, musicians constituted only one group in a vast migration, but the classical tradition they brought holds a special place in western culture. The transplantation of that tradition within one decade overwhelmed the American musical scene; no significant college, conservatory, university, opera house, concert hall, concert agency, or music publisher was left untouched. The impact was felt in every movie house in the nation. Not even jazz remained immune; Blue Note, the record company that arguably did more to disseminate jazz in the 1940s than any other, was the project of two émigrés. Two areas where the émigré influence counted less were Broadway and the synagogue, though even here they made their influence felt.

The prestige of the immigrant musicians would have guaranteed their impact on music in America, even if had they not taught a generation of eminent students. But most of them did teach, whether by habit or necessity, exerting enormous influence as pedagogues, and some went on to create music schools and summer festivals. Less visible but no less significant was the impact of the hundreds of lesser musicians who found work in metropolitan and provincial opera houses and orchestras, in concert agencies, in high schools and settlement schools, in conservatories and colleges. Quietly, unrecognized outside their communities, these people grafted their culture onto America's.

While the émigré impact was obvious, assessing their impact is another matter. To assert that their migration was for the good of music in America and Britain and leave it at that is to read history backwards, from the point of view of the victors. On the other hand, to assert that their immigration stifled the development of a native American music is to retreat into an isolationist fantasy. For all the good the migration produced, there was also a cost to the music of the host countries, and the nuanced balance sheet remains to be drawn up.

American abd British musicology followed a similar path. Early American musicology, a fledgling discipline from the founding of The Musical Quarterly in 1915 until the arrival of the first refugees, had cast a bold amateur net across the European continent, south to Latin America, and along the Pacific and Indian Ocean rims. By 1950 the émigrés established musicology as a profession and institutionalized it in colleges and research universities; but as they accomplished that feat, they had narrowed the field's focus, concentrating on the Central European tradition they had brought with them and studying it exclusively in terms of philology and style analysis. The critical editions that sit in the stacks of our research libraries bear silent witness to their program. The émigré model remained dominant into the 1980s, long after the passing of their generation, thanks to the teachings and writings of their students. Only in the past three decades have alternative critical models emerged, and with them acceptance of world and vernacular American repertories as legitimate subjects of scholarly investigation.

Since tracing and evaluating the impact of the émigrés on the culture and production of American music is a social study built on personal stories, so too is the impact of America on the émigrés. Who adapted successfully to America, and on what terms? Who did not? Although we find many successes and signal failures, it is the gray area in between failure and success that is most instructive, particularly when considering those musicians who did well but never managed a successful personal transition, retaining instead their European identities and predilections. Many stayed in the United States, usually for financial and family reasons, while others returned to Europe, either for good or for long regular visits, after the war's rubble began to clear.

Adaptation was related to personal factors, among them a person's age, personality, English-language fluency, and, in the cases of performers and composers, their reputation in America and the influence of their American publishers and agents. Here individual narratives play a vital role. The canvas is a sweeping one, with stories of every stripe from the inspiring to the heartbreaking, many of them buried in archives, obscure journals, newspapers, and memoirs.

I published four major articles on the subject beginning in 1999. In December 2012 I published Torn Between Cultures: A Biography of Kathi Meyer-Baer, a distinguished music scholar and bibliographer who was the second woman ever to receive a Ph.D. in musicology (Leipzig 1915). Unable to find a position in the German academic world as a woman and a Jew, she earned a living as a journalist in the 1920s, published as an independent scholar, and managed the largest private music library on the continent. In 1938 she fled with her husband and child to France, then two years later to the United States, where she encountered many of the same professional hurdles she had found in Europe. Nevertheless, she produced a large and varied output of books and articles and maintained a lively presence in the American musicological community. I am now planning a second book, an account of the involvement of the great American and British academic assistance committees of the 1930s in the rescue of émigré music scholars, their establishment of productive new lives as scholars and teachers in their host countries, and their impact on the field of musicology in those countries.