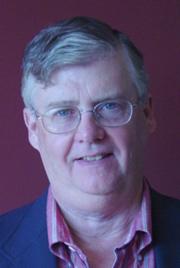 Russom is the author of Old English Meter and Linguistic Theory (1987) Beowulf and Old Germanic Metre (1998), and The Evolution of Verse Structure in Old and Middle English Poetry (2017). In addition to work on English verse form, Russom has published articles on the linguistic history of English, the multicultural backgrounds of Beowulf, and the artistic excellence of preliterate verse traditions. He is best known for arguments showing that rules of poetic meter are abstracted from rules of ordinary language and operate like new linguistic rules.

Historical linguistics traces related ("sister") languages back to a common ancestor and then explains the differentiation of the sisters in terms of linguistic changes that must be justified as simple and plausible, typically by reference to similar changes in other languages. My current research attempts to establish historical metrics as a parallel field that draws on historical linguistics and repays the debt with insight into natural-language developments of a kind that deliberate language, as opposed to spontaneous language, can provide. I work on English, the language whose history has been perhaps most thoroughly studied by linguists. English offers a rich archive of texts going back to the 7th century and its earliest verse form, the alliterative meter used in poems like Beowulf , is clearly descended from an ancestral Germanic meter also inherited by the sister Germanic linguistic and literary cultures: Old Norse, Old Saxon, and Old High German. Alliterative meter arises naturally from the structure of early Germanic, forming the basis for a preliterate tradition of oral-formulaic composition. It can be assumed unproblematically that such traditions change only when they absolutely must do so because of linguistic changes that make old metrical rules impossible to observe. In Beowulf and Old Germanic Metre (Cambridge University Press 1998), I showed how the sister alliterative meters diverged in response to linguistic changes within Old Norse, Old Saxon, Old High German, and Old English. Current publications show how the alliterative meter of Middle English poems like Sir Gawain and the Green Knight evolved from Old English meter as a result of language changes that transformed Old English into Middle English, drawing comparative evidence from similar responses to similar changes in the later metrical and linguistic history of Norse. Catastrophic language changes in Early Modern English are then used to explain why Middle English alliterative meter was abandoned very soon after it had been used for a variety of first-rate poetic narratives. Finally, the advent of rhymed iambic meters in Early Modern English is explained in terms of their better "fit" with the English of this period, in the sense of "fit" that prevails in universalist approaches to metrics like those of Paul Kiparsky, Kristen Hanson, Gilbert Youmans, and Charles Li.