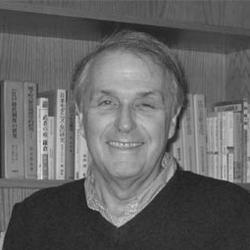 James L. McClain, is Professor and Chair of History, and received his Ph.D. in History from Yale. He has taught the history of early modern Japan at Brown for nearly a quarter century and is author of an award-winning book on Kanazawa: A Castle Town in Seventeenth-Century Japan (Yale University Press, 1982), and more recently a 700-page textbook, Japan: a Modern History, published in 2001 by W.W. Norton. He has further co-edited two volumes on Japanese cities, Edo and Osaka, in addition to articles in important venues. His research has won support over the years from the Japan Foundation and the National Endowment for the Humanities.

James L. McClain has taught and researched the history of early modern Japan at Brown for nearly a quarter century. He is author of an award-winning book, Kanazawa: A Castle Town in Seventeenth-Century Japan, and more recently a 700-page textbook, Japan: a Modern History. He co-edited two volumes on two cities, Edo and Osaka, and is author of numerous articles. His research has won support over the years from the Japan Foundation and the National Endowment for the Humanities.

I currently am researching a book to be entitled Tokyo Modern: The Dominance of the Middle-class in Twentieth Century Japan.

Throughout the centuries, the cultural ethos of particular social classes have stamped their images indelibly on Japanese history. The tenth and eleventh centuries were the Age of the Aristocrat, when noble families in Kyoto amassed fortunes, took their leisure in palatial mansions, and ushered in a golden age of high culture by becoming both patrons and practitioners of tanka poetry, courtly gagaku music, and other patrician arts. Samurai turned the medieval period into the Age of the Warrior, adding martial arts and the virtues of bravery, courage, and loyalty to the lexicon of Japanese self-identity. During the seventeenth and eighteenth centuries, the merchants and artisans of Edo and other cities forged an Age of the Commoner, and playwrights for the Kabuki theater, wood-block print designers, and haiku poets created new art forms that both identified the values of the merchant class and made up what we now consider as the primary hallmarks of traditional Japanese culture. In similar fashion, the twentieth century was to become the Age of the Middle Class.

What I plan is a narrative history that will offer fresh ways to appreciate and interpret the significance of the middle class in modern Japanese (and world) history. The middle class began to take shape at the turn of the century in Tokyo, and during the next two decades it quickly assumed a national importance by embracing modernity, introducing new models of family organization and novel conceptions of gender roles, and asserting itself as cultural arbiters in regard to housing, fashion, recreation, and consumerism. As a consequence, even though its numbers remained small in the pre-World War II years, the new middle class significantly influenced how all Japanese thought about themselves and how they expressed their aspiration to be regarded as an integral member of the international community of modern, cosmopolitan societies. The war years from 1931 to 1945 cast a long shadow over the middle class and called its values into severe question. In the postwar decades, however, the middle class reasserted itself. Not surprisingly, given its ambitions to cultural leadership, as it did so the middle class also became the prism through which foreigners viewed Japan and judged its progress in achieving modernity.

The above thumbnail sketch of the evolution of the middle class draws attention to the substructure of topics and arguments that will both support the narrative in Tokyo Modern and link together its individual chapters. Those chief interpretative themes include:
 Middle-class urbanity was the predominant mode by which the Japanese experienced modernity. That is, rather than seeing the modern condition as something that appeared first in the West and then was imported (i.e., copied) by non-Western peoples, the experience of the Japanese middle class suggests that increasingly Tokyoites conceived of modernity as a universal, transcultural, transnational phenomena. Put somewhat differently, being middle class was a way for Japanese both to feel modern and share a cosmopolitanism with people in Paris, Berlin, and Vienna, and to continue to be Japanese, in the sense that their particular brand of middle-class modernity incorporated specific elements from their own cultural traditions.
 The concept of middle class advanced in Tokyo Modern defines the middle class not just by occupation and income but, more fundamentally, by lifestyle and cultural values. Thus, I will be looking closely at fashion, housing, recreation, consumerism, education, and gender roles within families.
 The making of the middle class was a lengthy process that occupied most of the twentieth century. The dominance of the so-called "new middle class" that reached full visibility in the 1980s cannot be divorced from the appearance of the first middle class in the 1910s and 1920s. Consequently, Tokyo Modern will contain chapters on both the pre- and postwar decades and will highlight the importance of transwar continuities.
 The middle class version of modernity did not go uncontested. In the 1920s cheeky youth, political radicals, avant-garde habituates of the entertainment demimonde, and criminal women embraced lifestyles that challenged middle-class conventions. In the late 1930s and 1940s, as Japan slipped into war with China and then the Anglo-American powers, self-styled "Japanists" and members of the reactionary right launched an attack on what they saw as decadent middle-class values. At century's end, disapproving feminists, conservative politicians, and teenage delinquents who bullied fellow students or engaged in "subsidized friendship" with middle-aged patrons again called into question the virtues of a middle-class lifestyle. Tokyo Modern contains chapters on such dissident views not just because they are interesting and important in their own right but also because reactions to criticism helped shape the way that the middle class chose to represent itself.
 If the middle class was fundamental to how the Japanese came to define themselves, it also became the prism through which the outside world viewed Japan. Across the twentieth century, the Japanese were seen successively as backward Asiatics, war mongers, and economic animals, only to emerge by century's end as a cosmopolitan people who had a great deal in common with their counterparts in other modern societies, and whose accomplishments  as expressed in haute couture, sushi and saké, modern glass and steel architecture, and movies, anime, and Japan Pop!  enriched other cultures.

As its title indicates, this book will focus on Tokyo. One reason for this, of course, is that the middle class emerged first in Tokyo and, in many ways, the Tokyo middle class became the nation's model. Second, because of Tokyo's significance, a great deal of the scholarly literature that will provide a foundation for this narrative history focuses on the middle class in that city. Moreover, several sometimes overlooked or recently established archives (such as the collections at The House of Shiseid?, the NHK Museum and Library, the Salt and Tobacco Museum and Library, and the Ad Museum) contain materials that illuminate lifestyles in twentieth-century Tokyo. Finally, maintaining a focus on one city will permit me to tell the story of the middle class in intimate detail.

As suggested above, I will draw my information from recent scholarly literature and my own research. Happily, several excellent monographs about the Tokyo middle class have appeared in the past few years, in both Japanese and English. As models of the historical profession, most of these tend to focus on particular, carefully defined topics (for instance, Ishizuka Hiromichi for middle-class occupations in the Taish? decades, Minami Hiroshi on urban lifestyles, Narita Ry?ichi on sexuality, Jordon Sand on homes and interior decorating, Kathleen S. Uno on childrearing, Christine R. Yano on popular music, and Kendall H. Brown on the Art Nouveau and Art Deco movements, to name just a few) and most conclude by 1941 or begin their story after 1945. In Tokyo Modern I fully intend to use the findings of this excellent literature to create a more holistic portrait of the middle class that weaves together the pre- and postwar experiences. To this body of scholarship I will add what I learn from my own research in archives, such as those named above, that have materials explicating middle-class lifestyles. Fortunately, I was able to investigate the holdings of those achieves during a two-month stay at Keio University in 2004-2005.

In sum, I intend Tokyo Modern to be an encompassing narrative  distinctive in its interpretational thrust, topical coverage, and chronological scope  that explicates the growth of the middle class in Japan, explains its historical significance, and underscores what it means to be modern in a universal, transcultural context.

I also hope that Tokyo Modern will be richly illustrated. The narrative can carry some chapters, but there is a wonderful treasure house of material, ranging from matchbox covers to department store ads to postcards, that can be used to great effect to enhance the discussion of middle-class consumerism and lifestyles.

Kinsei no ?saka. Osaka: Osaka University Press, 2000. This is the revised, Japanese version of ?saka: The Merchants' Capital in Early Modern Japan, below.

Edo • Pari. Tokyo: Iwata Shoten, 1995. This is the revised, Japanese version of Edo and Paris: Urban Life and the State in the Early-Modern Era, below.

Received the 1996 Hiromi Arisawa Memorial Award for Edo and Paris from the American Association of University Presses.

Grants from the National Endowment for the Humanities and from the Japan Foundation for the conference "Osaka: Cultures of Dominance, Cultures of Opposition." Honolulu, December 15-18, 1994.

Grants from the Institute for International Studies (Brown University), Tokyo Municipal Government, and the Nomura Foundation for the conference "Edo and Paris in the Early-Modern Period." Tokyo, June 3-7, 1990.