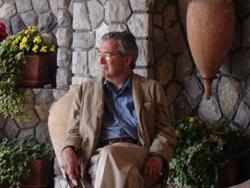 Stephen Merriam Foley is a graduate of Brown, with a degree in Classics and English. He received the M.A. and Ph.D. in English from Yale University, where he also taught in the Department of English. He is the author of a book on the poetry of Sir Thomas Wyatt, co-author of Conventions and Choices, a handbook for writers, and co-editor of Sir Thomas More's Answer to a Poisoned Book, a work of religious controversy published in the Yale Edition of the Complete Works of Thomas More, and co-editor of a collection of essays on More and Erasmus in Moreana, the journal of Thomas More Studies. He has served as chair of the department of English at Brown, as the editor of Modern Language Studies, and as research editor for the Yale Edition of the Works of Thomas More, . His research includes European renaissance culture and letters, classical traditions, literary theory, and aesthetics. His article on Sir Thomas Elyot's Dictionary was awarded the Beatrice White Prize for excellence in renaissance studies by the English Association of Great Britain

Stephen Foley is currently pursuing work on formal innovation in lyric poetry of the renaissance.

"The English Renaissance, or My Last Duchess," Literary Imagination 8.1 (Winter 2006)

"Unhinging Tibullus: A Note on Tibullus 1.1," in "Being there together:" Essays in honor of Michael C. J. Putnam, Afton Historical Press, 2003

"Elyot's Definitions and the Particularity of Human Letters," ELH (1994).

"Falstaff in Love and other stories from Tudor England," Exemplaria, A Journal of Theory in Medieval and Renaissance Studies, 1,2 (1989)

Answer to the Poisoned Book, (co-editor with C.H. Miller), volume 11 of the Yale Edition of the Works of St. Thomas More, Yale University Press, 1986

Conventions and Choices, A Brief Book of Style and Usage (co-author with J.W.Gordon), D.C. Heath, 1985

"The Chordigera of Germain de Brie," in Latin Poems, Volume 3, part 2 of the Yale Edition of the Works of St. Thomas More, Yale University Press, 1984

Beatrice White Prize for the Outstanding Article in English Literature before 1590, for "Coming to Terms," ELH 1994