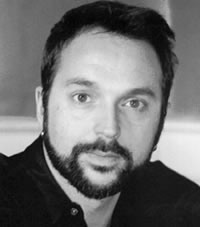 Frederick Jodry has been Director of Choral Activities at Brown University since the Fall of 1991. He holds a Bachelor of Music in Organ Performance and a Master's in Early Music Performance from New England Conservatory, Boston. The founder and Director of the Schola Cantorum of Boston, Mr. Jodry has led this 14 voice Renaissance choir in performances throughout New England. The Schola Cantorum and the Boston Camerata have collaborated in numerous projects including appearances at Tanglewood and Merkin Hall, New York. Together the two groups have recorded five CDs, two of which also feature the Brown University Chamber Singers. As a vocal soloist, Mr. Jodry has sung with the Boston Cecilia, the Providence Singers, the Civic Chorale, the Studio de Musique Ancienne de Montreal, and at the Oberlin Baroque Performance Institute with Gustav Leonhardt. Since 1996 Mr. Jodry has been President of Museum Concerts, a series in Providence devoted to presenting performances by historically informed ensembles. Mr. Jodry is Director of Music at the First Unitarian Church, Providence, and can be heard as a harpsichordist, organ recitalist and singer.